The delay time between starting the readout and writing to the MEB is put at the second LmReg register.

The results from the analysis of the previous runs produced the following plots for each DDL:

After an analysis of the run 80463, the following final values were chosen for 2009 (with bold we have the different values with respect to the previous table):

In 2010, we performed more tests by changing the readout phase and looking at residuals with respect to SPD and cluster shapes. The runs used were:

The main result is shown in this figure: 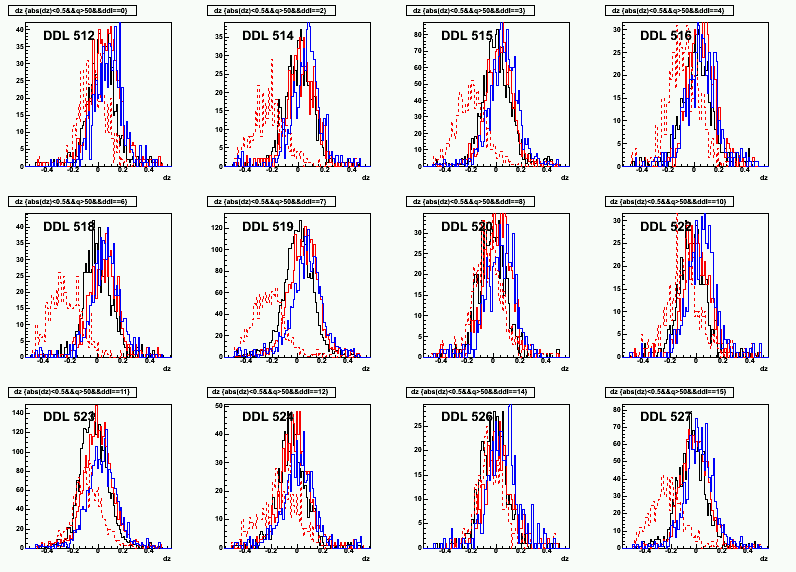 which shows the z-residual wrt to SPD per DDL for the different time settings. The general trend is a relatively smooth apparent shift of the SSD as a function of readout time of a few 100 microns per 16 ns. However, there are clear differences between the various DDLs.

Another way to get a feeling for the readout timing is by looking at the cluster shapes. We expect a fairly large fraction of single-strip clusters due to the charge-sharing properties of the strips. These plots show the number-of-strip distribution of P and N side separately, again per DDL and for the different time settings. 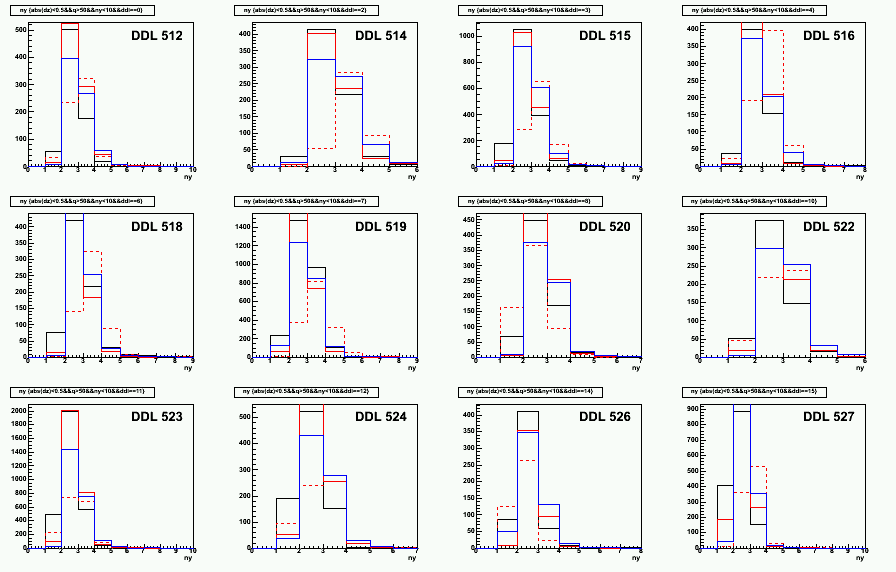 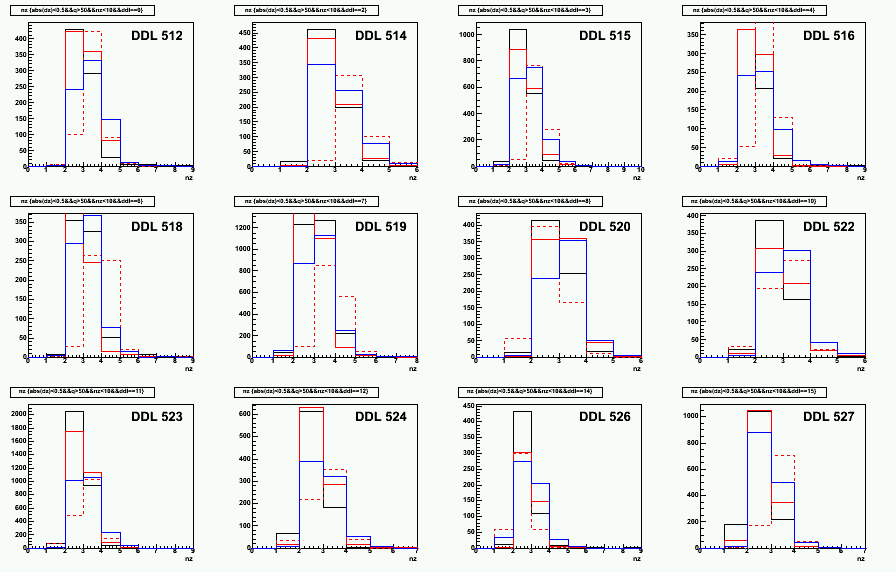 Ladder 507 showed a significant dependence z-residuals on z for the standard alignment procedure, suggesting that at least one of the sides is read-out at the wrong time. This ladder is connected to DDL 519 and 527. In the 'bad pedestal test' (SsdHoldTime09), DDL 519 showed one or a few ladders that may have slightly longer cables and be read out too late with the nominal setting. Here we show the mean z-residual per ladder in layer 5 for ladders connected to DDL 519: 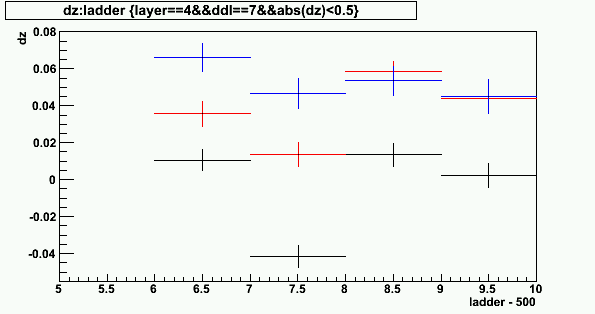 Clearly, ladder 507 is an outlier with the nominal setting. This will improve when reading out 16 ns earlier. A side-effect of such a change is that it will cause apparent shifts in the other ladders connected to DDL519 as well. If we shift the readout to 16 ns earlier, that may cause an apparent shift for the entire DDL (but it may also just shift ladder 507 and keep the rest the same, we do not have enough statistics to know that with certainty).

In the above, it is argued that DDL 518 and 519 should be read out 16 ns earlier. Here are detailed ladder-by-ladder plots to support that. The legend is the same as above. 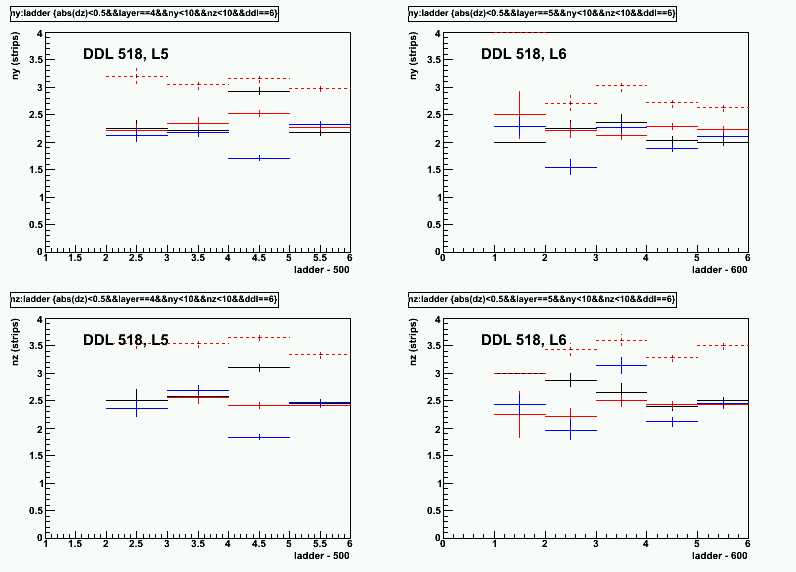 DDL 518 shows a significant improvement in cluster shape for ladder 504 when going to -16 ns (red lines). Not enough statistics to judge residuals. 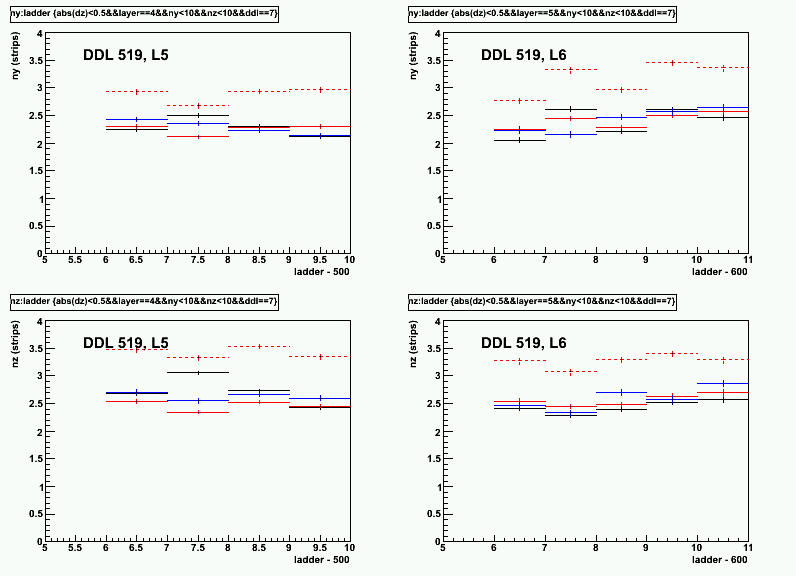 DDL 519 ladder 507 is an outlier in the nominal setting, residuals move back and cluster shape improves at -16 ns (red lines). 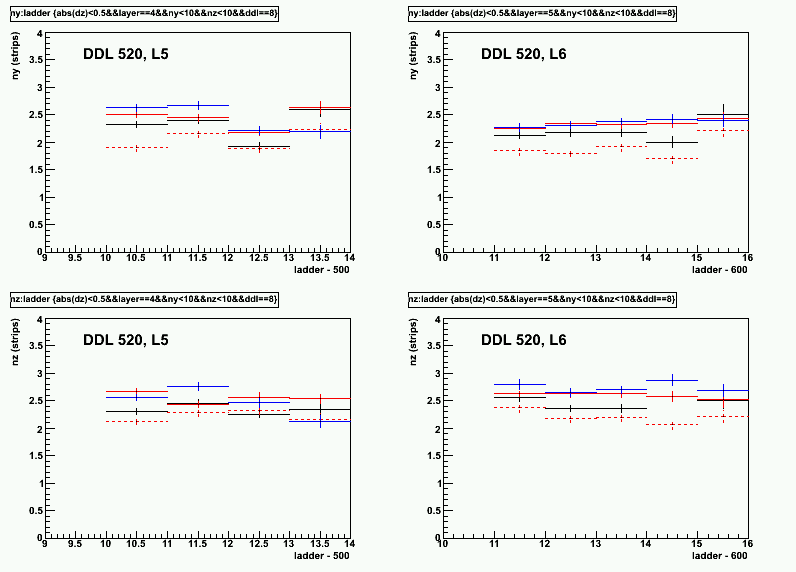 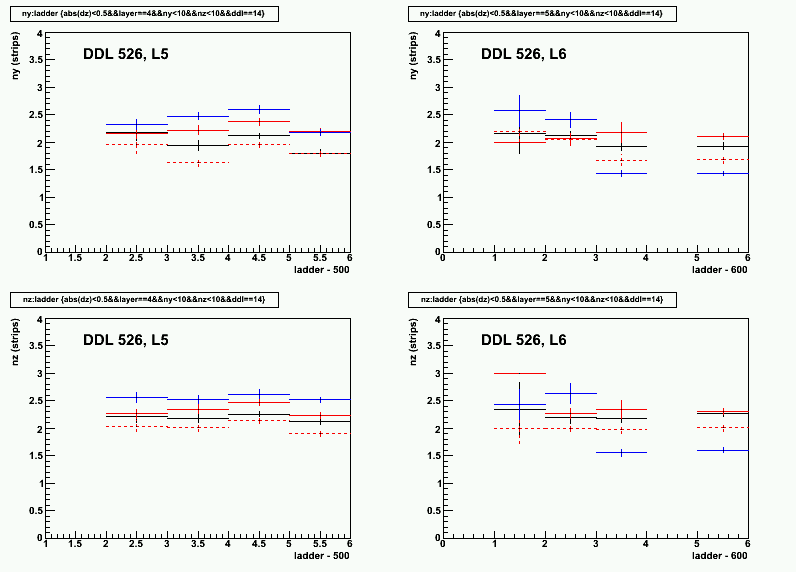