After a complete test of the 144 half-ladders composing the SSD and the integration with the Silicon Drift Detector, during the fall of 2007 the detector was lift down in the ALICE cavern and installed inside the TPC in the final experimental site. Each ladder was connected via approximately 40 m long twisted pair cables to the power supplies and to the FEROM modules, which provide in turn the connection with the system Data AcQuisition system (DAQ), the Detector Control System (DCS) and the Trigger System. During this preliminary phase, the corresponding functionalities of each ladder were individually verified with the locally controlled test system. Once connected and tested the cooling system, the SSD was globally powered and controlled as a part of the ALICE apparatus for the first time. The ALICE experiment is controlled by several independent "on-line systems". Each system carries out different types of operations belonging to a different domain of activities: Detector Control System (DCS), Data Acquisition (DAQ), Trigger system (TRG) and High-Level Trigger (HLT). These systems are independent, may interact with all the single particle detectors and allow groups of them to operate concurrently, within the so-called partitions of detectors. In the final setup the detectors will work all together to collect physics data. In the commissioning phase, however, detectors can run as independent objects for testing and debugging purpose. While this mode, called "standalone mode", is absolutely vital in the commissioning and testing phase, it will also be required during the data-taking phase to perform calibration procedures on individual detectors. It will therefore remain essential during the whole life of ALICE. The functionalities of the detector are mainly controlled by the Detector Control System; responsible for the control and the integration of all the ALICE sub-detectors in a single framework, the DCS provides a constant and complete monitoring of the status of the SSD ladders, for what concerns the sensor bias HV and the electronics LV power supplies, the sensor bias current and the temperature of the modules. The screenshot in fig. 1 gives an example of the on-line overview of the detector conditions, as captured during one of the commissioning tests: each triangle represents a half-ladder; the dierent colors indicate the operating status of the corresponding power supplies and of the front-end electronics. 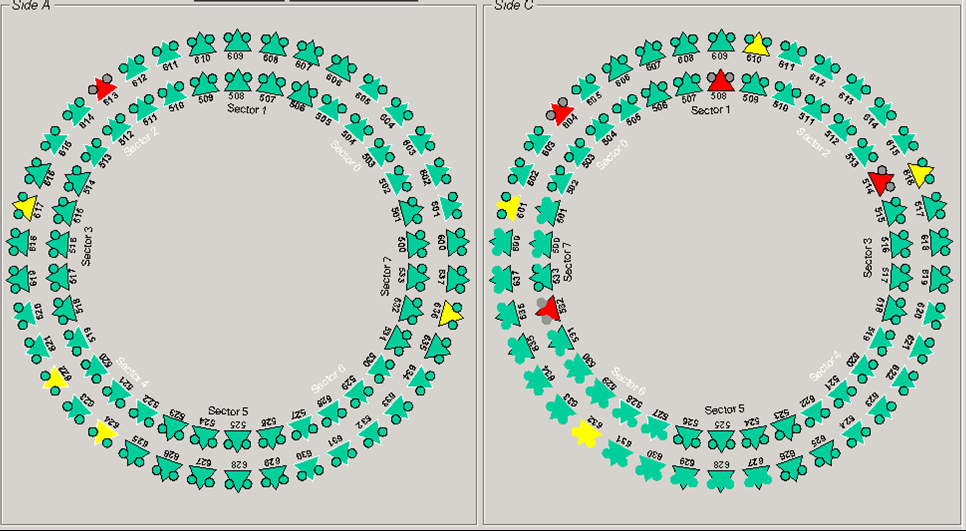 Figure 1: The DCS software output page showing the status of HV, LV and current of the SSD ladders. The triangles indicate the ladder bias voltage status, the side circles refer to the electronics.

The integration of the SSD detector with the mentioned control systems was tested through a large set of acquisition runs during the 2008 commissioning sessions. The SSD acquired data both as a stand-alone detector and as a part of a more complex partition of sub-detectors remotely controlled. The work was mainly devoted on one side to optimize the operating parameters, to test, to debug and to calibrate the detector, on the other side to check the compatibility of its operations with the rest of ALICE. The SSD can operate three dierent congurations, corresponding to three run categories, i.e. the stand-alone run, the pedestal run and the global run:

- at the default rate (40Hz) to test the synchronization between the read-out operations and the signal digitization;

- at different trigger rates to test the general behaviour of the systems and in particular the noise behaviour;

- at the default rate as a benchmark to check the output data quality of the pedestal runs.