The module is made of a double-sided silicon microstrip sensor read-out by two hybrid circuits.

The sensor is 300 µm thick and has a total area of 75×42 mm2. 768 strips are implanted on each side; each strip is 40 mm long and the pitch between strips is 95 µm. The surface of each sensor side is surrounded by a line providing the bias voltage (bias ring) and another one protecting the sensor from border instability effects (guard ring); these lines occupy 1 mm along each side of the sensor, reducing the active area to 73 × 40 mm2. On p-side, the strips are biased by punch-through from the bias ring; a similar scheme has been adopted on n-side, where the strips are biased by injection of electrons toward the bias ring, across a potential barrier created by the insulation structure (p-stop or p-spray). The strips of the sensor are oriented with an angle of 7.5 mrad with respect to the short edge of the sensor on the p-side and with an angle of 27.5 mrad on the n-side, forming an overall stereo angle of 35 mrad (see Figure 1). 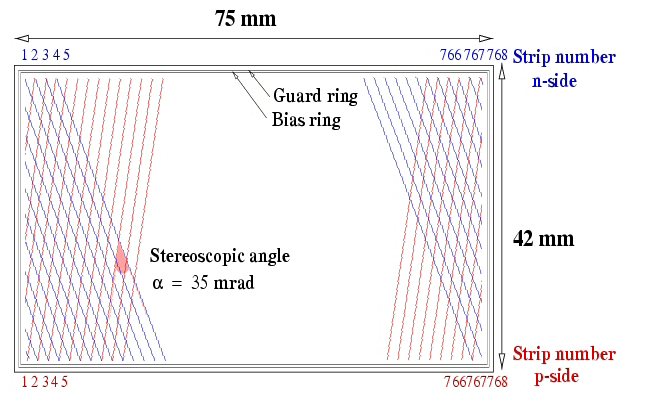 Figure 1: Sketch of the SSD sensor layout. The strip are disposed in order to form with the shorter sensor edge an angle of 7.5 mrad on the p-side and of 27.5 mrad on the n-side. The bias ring and the guard ring all along the sensor edges provides the bias voltage to deplete the junction and avoids border instability phenomena respectively.

This small stereo angle has been selected to limit the number of ambiguities resulting from the expected high particle densities. In these conditions, the probability to detect more than one particle with the same sensor is quite large: several strips can be ﬁred in this case, or the same strip can interact with even more than one particle. The point reconstruction is thus ambiguous: in ﬁg. 2, four fired strips allow the reconstruction of 4 diﬀerent points; only one pair is originated by particle interactions, while the other two points are ghost events. Normally such ambiguities can be resolved thanks to the charge correlation between the P-side and N-side. As shown by simulations, the 35 mrad stereoscopic angle optimizes this ambiguity resolution.

Figure 2: Ambiguities in the event reconstruction in case of two simultaneously red pairs of strips. The actual interactions (3 and 4) can be discriminated from the ghost events (1 and 2) studying the charge correlation between the two sides of the module.

Mounting the sensors with the n- or p-side facing the interaction region in layers 5 and 6 respectively results in four diﬀerent orientations of the strips with respect to the beam direction. This reduces the fake track probability signiﬁcantly, resulting in much more robust tracking. The sensors are mounted with the strips nearly parallel to the magnetic ﬁeld, so that the best position resolution is obtained in the bending direction. The main geometric characteristics of the sensor are listed in table 1. Before being used for assembly a detector, each sensor is extensively tested an a probe station in order to check its behaviour in terms of leakage current, depletion voltage and strip insulation and other parameters.

The produced modules, after the quality validation, have been mounted together on the carbon-fiber supports in groups of 10, 12 or 13 units, forming 144 half-ladder, disposed in turn to form the 72 SSD ladders (see fig. 3.29 and 3.30). This phase of the SSD assembly was carried out in Amsterdam (Netherlands) and Nantes (France). 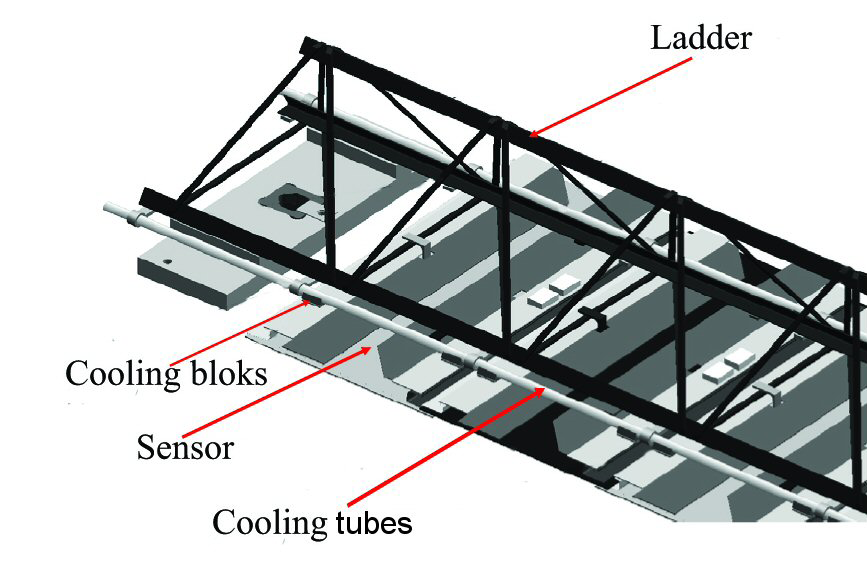 Figure 3: Scheme of the SSD ladder (detail ). The sensor is mounted under the carbon fiber support (ladder); the tubes providing the cooling distribution are fixed on the module hybrids through the cooling blocks.

Afterwards the ladders were installed on carbon ber support cones in two concentric cylinders in Utrecht (Netherlands), composing the two layers of the SSD. For each layer the ladders are mounted in two slightly different radii such that their sensors partially overlap and the full azimuthal coverage is obtained. The modules are cooled by water running through two thin (40 m wall thickness) tubes along each ladder. The ladders are controlled and read-out through the ECMs (EndCap Modules). Each half-ladder end has an ECM which provides the interconnection between the outside world and its 10, 12 or 13 SSD-modules. Layer 5 ladders have 22 SSD modules, where 10 modules are connected to the ECM on one side and 12 modules to the ECM on the opposite side. For layer 6 (25 modules), the number of modules per side is 12 and 13 respectively. The analogue to digital conversion of the signals is performed in the Front-End ReadOut Modules (FEROM) located outside the ALICE magnet. 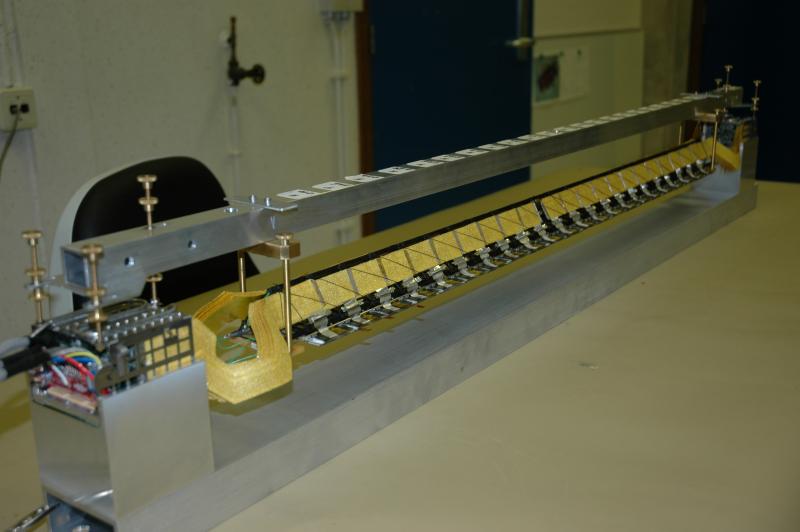 Figure 4: ladder during the assembly operations. 22 modules are installed on the carbon fiber support and electrically connected to the EndCap modules placed on both sides. See the text for the description of the dierent components and their functions. 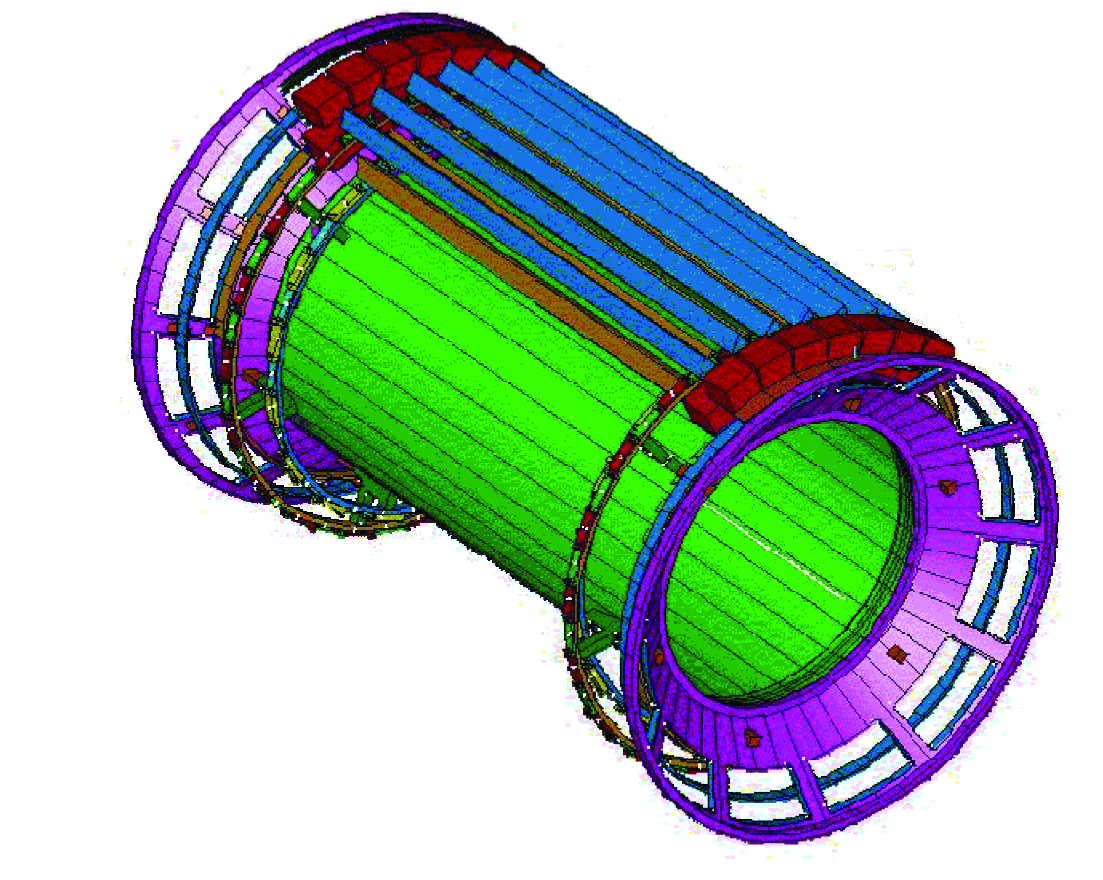 Figure 5: Scheme of the SSD cone. The ladders are progressively installed on the carbon fiber cones with the corresponding EndCap modules, forming the two SSD cylindrical layers. 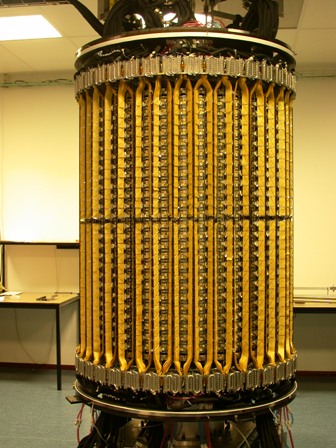 Figure 6: Photograph of the SSD in the nal conguration, taken at the Utrecht laboratories just after the end of the assembly operations. The cables connecting the Layer 6 modules to the corresponding EndCaps are visible, while the sensors are facing the cylinder axis. The Layer 6 is built around the Layer 5 ladders.