Even these stages of the SSD assembly were monitored with continuous tests in order to detect every possible damage originated during the manipulation of the devices and to spot new problems deriving from the new configuration. All the sensors mounted on a ladder, namely groups of 10, 12 or 13 units depending on which layer and side of the detector they are installed on, are indeed biased through the same line. Therefore it's necessary to define a voltage value capable to deplete all the sensors, remaining at the same time lower than the breakdown voltage. The measured current, in this case, does not bring information about the single modules and their depletion. The evaluation of the most convenient bias voltage value is carried out scanning the whole range 0÷80 Volts and measuring at each step the noise: the voltage level allowing the insulation of the strips is determined with the same procedure followed by the test system, described for the single module test.

Moreover, a complete characterization of the almost 20000 channels composing each ladder was performed: pedestal, noise and common mode noise were measured at the various stages of the construction of the layers and after the transport to the ALICE location at CERN before being lifted down into the cavern and installed in the final experimental site. A system of thresholds based on the common mode subtracted noise measurements allowed to detect, classify and count the defects present on the detector at this stage. The noise as a function of the strip number is shown in the following figures, where the defective channels are highlighted by the red lines. The defects can be summarized in the following typologies:

- Noisy channels: channels presenting high noise with respect to the average noise level measured in the module side they belong to; a channel is anyway classified as noisy if  >12 rms ADC units (see Figure 2), in order to assure a signal-to-noise ratio S/N & 10 for MIP signals (1 MIP & 120 ADC units). 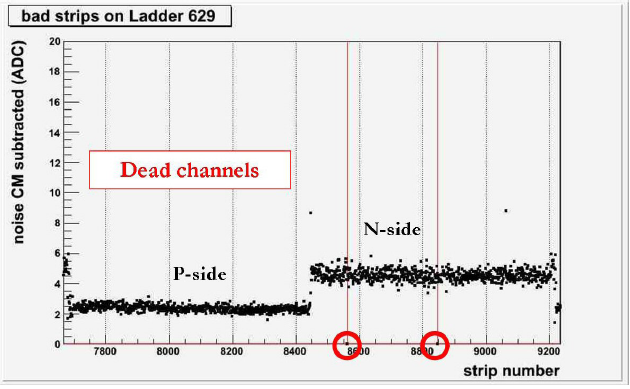 Figure 1: The noise is plotted as a function of the channel number, for a module belonging to the Ladder 629. Two N-side channels with  0 rms ADC units are tagged as dead channels. 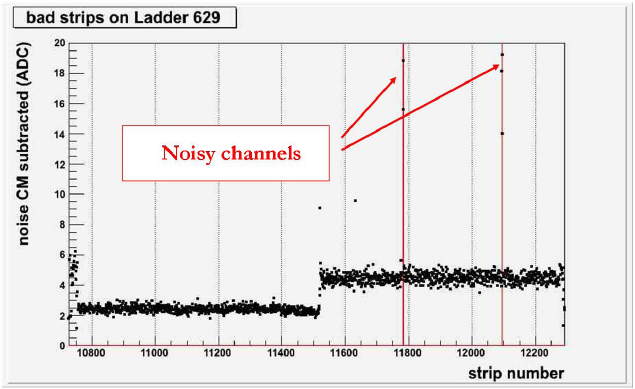 Figure 2: Noise vs. channel number for another module installed on the Ladder 629. Several channels presenting  >12 rms ADC units are tagged as noisy.

- Undepleted sensor: both module sides, or at least their central regions, appear very noisy (see the left red-lled zone in fig. 4); an unsuitable bias voltage is applied to the sensor.

- Sintef problem: P-side noise higher than normal and increasing with time; the detector uses a SINTEF sensor and showed the same problem in the laboratory tests. 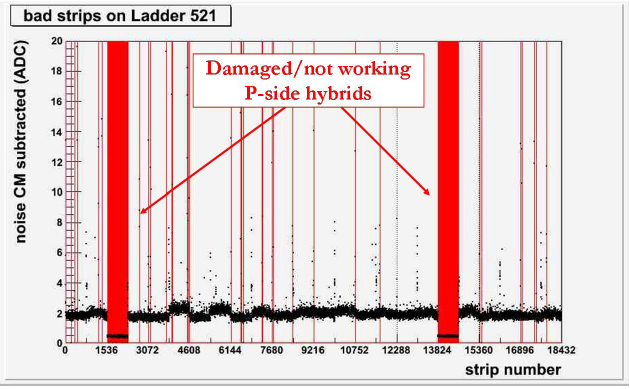 Figure 3: For the whole Ladder 521 the noise is plotted as a function of the channel number. The red-lled areas correspond to module sides whose electronic is inactive: they present low noise and cannot read-out any physical signal. 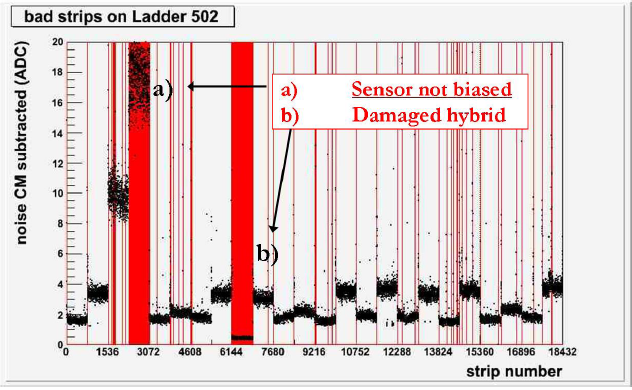 Figure 4: The noise of Ladder 502 is plotted as a function of the channel number. The a) red area spots an undepleted sensor: all the channels belonging to that module present a high noise level. The b) red area indicates a hybrid whose electronics is dead.

- High bias current on a half-ladder: the half ladder can not be operated since it shows a very high bias current even applying a few volts; the voltage drops through the bias resistor avoiding the sensor depletion does not allow the sensor to deplete. After electrical tests on the components, this defect turned out to be caused to a short in the electronics power lines; its repair appears difficult since it should be located inside the SSD cone already installed.

The defects detected by this extensive analysis were then counted and classied before the nal installation of the detector in the experimental site. They are summarized in table 1. The results certied the global quality of the SSD: the detector finally presents only 2% defective channels out of about 2.6 million SSD channels.

Table 1: Percentage of defective channels out of the total number of channels belonging to the considered SSD sector. The last line resumes the overall defects percentage with respect to the 2.6 million channels of the SSD. Each layer is divided into two sectors: the C-side, towards the Muon Arm side, and the A-side, on the opposite side. The two sectors have different numbers of channels, thus they weigh differently in the computation.